The World’s Largest Airport Will Open This Week

China Southern, one of the main airlines at the airport, is expected to deploy an Airbus A380 around Friday, Sept. 20 (but it could push back to Sept. 30) to christen the airport, according to Chinese state media. Construction was completed back in June, but the airport only passed final inspection on Sept. 15.

The airport, designed by Zaha Hadid, measures more than 700,000 square meters. It has been nicknamed the “starfish” by local media for its resemblance to the animal, with several wings shooting off of one central point. The airport will include separate passenger areas for domestic and international travel. It is expected to become the world’s largest airport in terms of surface area. 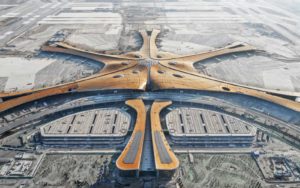 But despite its large size, the airport was designed to minimize how long passengers need to walk to get to their gate. According to CNN, it was designed so that passengers will not walk any longer than eight minutes to get from the security checkpoint to even the furthest gates.

Beijing Daxing will be capable of accommodating more than 100 million passengers per year once fully operational. However, it will take at least a few years to reach that capacity.

The airport is also expected to boast some high-tech features. Customer service robots will roam the terminal and provide passengers with up-to-the-minute updates on flight status and weather. The airport also hopes to become a transportation hub, complete with high-speed rail. Express trains will be able to get passengers from the airport to the city center in less than 20 minutes.

It is expected that the airport will have service to 112 destinations around the world by Spring 2020.

Finnair to gradually return to flying from July

Finnair will start flying again from Heathrow and Manchester in…

Eurowings will add a series of destination in the Mediterranean…

12.05.2020
Antarctica And Greenland Are Losing Thousands Of Gigatons of Ice — That’s A Lot

As the climate has warmed, Antarctica and Greenland have lost…